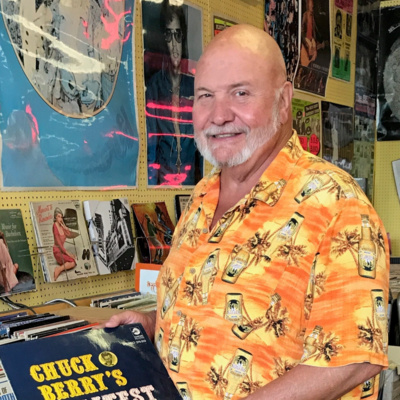 Pete "Fat Cat" Flanders is perhaps one of the best remembered radio personalities in the Mid-Michigan media market.  He is the owner of Musical Memories, a Flint record shop that specializes in vinyl record sales.

Pete recounts his 40 year history in Flint area radio sharing stories from his long career as a DJ, Concert Promoter and Businessman.  Pete worked at WHMM with its urban format and WTAC with its contemporary Rock format.

He has worked as a promoter, announcer, or tour assistant to some of the greatest names in R&B, Soul Music and Rock.  He worked for a year on tour with the legendary James Brown.  In his early days he promoted Jackie Wilson, Temptations and other R&B artists.

Pete was especially close to Peter C. Cavanaugh who was a local DJ, station manager, promoter and author.  He recounts many memories of his relationship with Peter C and their antics.  They co-promoted the 1960's rock band the MC5 with Wayne Kramer and Rob Tyner. In one case he relives a story of the band appearing at Davison, Michigan's Sherwood Forest when the bands performance was stopped by the police because of an obscenity in the lyrics of their most popular song.