Behind the Wheel at age 10! The Flint Safetyville I Remember 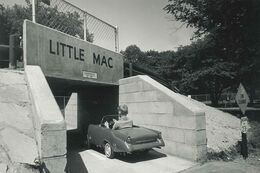 Safetyville, Flint is a special place for the Flint area baby boomers.

STOP-LOOK-LISTEN remember that lesson about crossing the street in your hometown? Many Flint baby boomers received their first driver's license at Safetyville-Flint. It was located at Kearsley Park. The powered cars were vintage replicas of the Ford T-Bird, and just for good measure, there were a few Corvettes.
I recently interviewed Len Exline, a collector of these miniature cars. Len explained there were just four Safetyville-type parks in the United States. The miniature cars were helpful in a Taco Bell commercial and a movie. Most kids in Flint during the 1960s and 1970's waited hours down to their visit to Safetyville.
We zipped around the roads and past sights like a replica of the Mackinaw bridge. There were college kids and cops there. The idea was to teach us how to be safe around the streets of our neighborhood. These little cars were not go-carts with loud gas engines. These were slick and quiet little cars, the kind a kid can only dream of driving. I waited my turn for weeks to get to Safetyville. They had a measuring stick by the entrance gate. I think you must measure up and be at least ten years old. There were lines and lines of kids who wanted to get into Safetyville for the chance to be like Mom and Dad and drive a car. Flint was all about cars in those days. Cars were the lifeblood of Flint, Michigan, in the 1960s.
For nearly 20 years, Flint's Kearsley Park was home to a 36,000-square-foot miniature city that featured sidewalks, small buildings that looked like Flint, a police station, a fire station, little wooden houses, blacktopped city roads, street signs, traffic signals, and battery-powered miniature automobiles that looked like Corvettes and GM Cars.
Flint Police, who worked with us kids, wore the riot helmets, and that scared me a bit was there to help teach us about pedestrian and traffic safety during our tour of Safetyville. For many kids, it was a time when they paid way better attention than in a Freeman Elementary School classroom. Getting a driver's license was the coolest, most important thing in the whole wide world. After a walk through the miniature city of Flint, the college kids and cops gave us a test. If a kid passed it, they would receive their first driver's license.
I remember studying for that damn test. I needed to know the shapes and colors of the highway signs! The test seems like such a simple thing now. But back then, it was all I could think about except, of course, the Detroit Tigers beating the New York Yankees.
With my Safetyville driver's license, I could return to drive those cool little cars throughout the summer. And boy, was I ever after my mom to take us to Safetyville. We usually brought along our friends to the little Flinttown too.

The East Side of Flint Was Magic in the 1960s

My mom was from the east side of Flint. She grew up on New York Avenue, just a short drive from Safetyville. My aunts and uncles still lived in that eastside neighborhood. For me, the east side of Flint was another world away from the newer Cape Code houses in the south end of Flint. The east side of Flint was a familiar area, especially Flint's famous Angelo's Coney Island.
We had our park in the south end of Flint, Windiate Park, built around the chemical dump site GM left behind in the 1950s. We had good playground equipment and a park leader. They called it that program with the leader, "Tot Lot," back then. The leader was usually a college kid who babysat the entire neighborhood and led them in arts and crafts and games. "But one thing we didn't have was a miniature city with cool cars to drive.
The Eastside of Flint had Kearsley Park. "It was an old place with a strange-looking concrete pavilion built like a fort. It had a big swimming pool that was the center of attention in the neighborhood in the warm Michigan summers. My mom occasionally let us swim or play on the playground equipment with our cousins.
Kearsley Park was built in 1963. Two new playground structures (Kearsley Park Playland and Kiddieland Junior) comprise Kearsley Park and the fabulous Safetyville. Safetyville was a total of 30,000 square feet, a miniature town courtesy of the Industrial Mutual Association, known by the locals as the IMA.

The Flint IMA and its Incredible History

The IMA was a charitable organization started by GM in the 1920s to provide recreational and social amenities for the people of Flint.
In addition to Safetyville, the IMA had an auditorium that held the circus, concerts, and significant community events. Over the decades, many of the world's best-known entertainers appeared at the Flint IMA. The IMA owned and operated a championship golf course called Brookwood, and it funded recreational leagues for autoworkers and their families to participate in various sporting activities. We were lucky in Flint, Michigan, because back then, kids and families had world-class amenities in our city.
Today, many of the things the IMA built were demolished, just like the GM automobile factories.
In my mind, the best thing the IMA ever did for my family and friends was provide the money for Safetyville. Kids could drive the 12 miniature powered car replicas of Corvettes and other GM vehicles around the small Flint town, provided they knew the road rules and passed their road test. I learned how to navigate a city street safely. We learned the rules of the road.
The operating concept of Safetyville in the 1960s was a fun and educational project geared toward children aged five to ten years old. Spring, summer, and fall sessions were held between April and October. Safetyville hired as many as three dozen teenagers who were then hired to help manage the excited visitors.
The citizens of the mini-Flint were the children of our community. Safetyville had 25 cars equipped with seat belts, an accelerator and brakes, and a blazing hot top speed of 3 mph. The lack of speed never bothered the kids. It is said that Safetyville had 13 new electric-powered Chevrolet Corvettes in all colors. The boys in my neighborhood dreamed of having a Chevrolet Corvette someday.
In 1969, Safetyville attendance was down. The year's attendance was 17,551, a decrease in attendance from 3,799 the prior year" The declining attendance was attributed to teachers' strikes and bad spring weather" From 1963-1969, the total number of participants was reported to be 109,812.
In 1975, it was reported that "Safetyville USA was alive and well." But the reality was that Safetyville began to have financial problems. In the 1970s, the City of Flint ran the park and was in big financial trouble.
The area and neighborhood surrounding Safetyville began to decline. Safetyville and the park were severely vandalized.
Eventually, in 1981, the mini-Flint town was demolished. The Kearsley Park swimming pool met the same fate in 1984. It was sad to see, as my family used to go to that park every 4th of July to watch the fireworks and listen to music. It was an excellent place for families to gather. Many Flintstones still have fond memories of the park.
The IMA, who built Safetyville, operated it from 1963 to 1978. The City of Flint acquired the operation of the mini Flint town and re-named it Safetyville, USA. For thousands and thousands of Flint area residents, their first experience "behind the wheel of a car was at IMA Safetyville. It was one of those extraordinary experiences that evoked many fond childhood memories.
Read more about Safetyville, Flint, Michigan at My City Magazine:
SAFETYVILLE, USA